Money may make the world go round, but the rise of Bitcoin and other cryptocurrencies has put the fintech sphere and wise heads in a bit of a spin.

2017 was seen as a watershed as the value of Bitcoin peaked shy of $20,000, prompting headlines and fierce debate around the globe.

More significantly, though, the penny has dropped that the blockchain technology underlying Bitcoin had even wider implications – for every sector from finance to civic affairs.

Since the dawn of the internet, IT pioneers and cryptographers have been trying to devise a new digital money. In November 2008 that puzzle was finally solved. Satoshi Nakamoto – the pseudonym of a very clever individual or perhaps, an expert group – published the design for a digital currency to be called Bitcoin.

Bitcoin succeeded where others had failed because of its foundation on blockchain technology. Its forerunners, like conventional currencies, required a central clearing house to prevent fraud by ensuring no-one could copy and spend the same digital dollar over and over.

With Bitcoin, this financial ledger is shared across a ‘blockchain’ of computers that can distribute rather than copy data. This network acts as a self-auditing ecosystem that reconciles each transaction. It provides a public record of the life of each Bitcoin. And the computing power also generates new currency in a controlled way.

Computers running the software compete to solve irreversible cryptographic puzzles that contain data from several transactions. The first to solve each puzzle is rewarded with new Bitcoins, and that block of transactions is added to the chain. Over time the difficulty increases as the number of these Bitcoin ‘miners’ grows. A block of transactions continues to be added roughly every 10 minutes but the number of newly ‘mined’ coins progressively decreases. The currency is designed to reach its limit of 21 million Bitcoins around 2140. 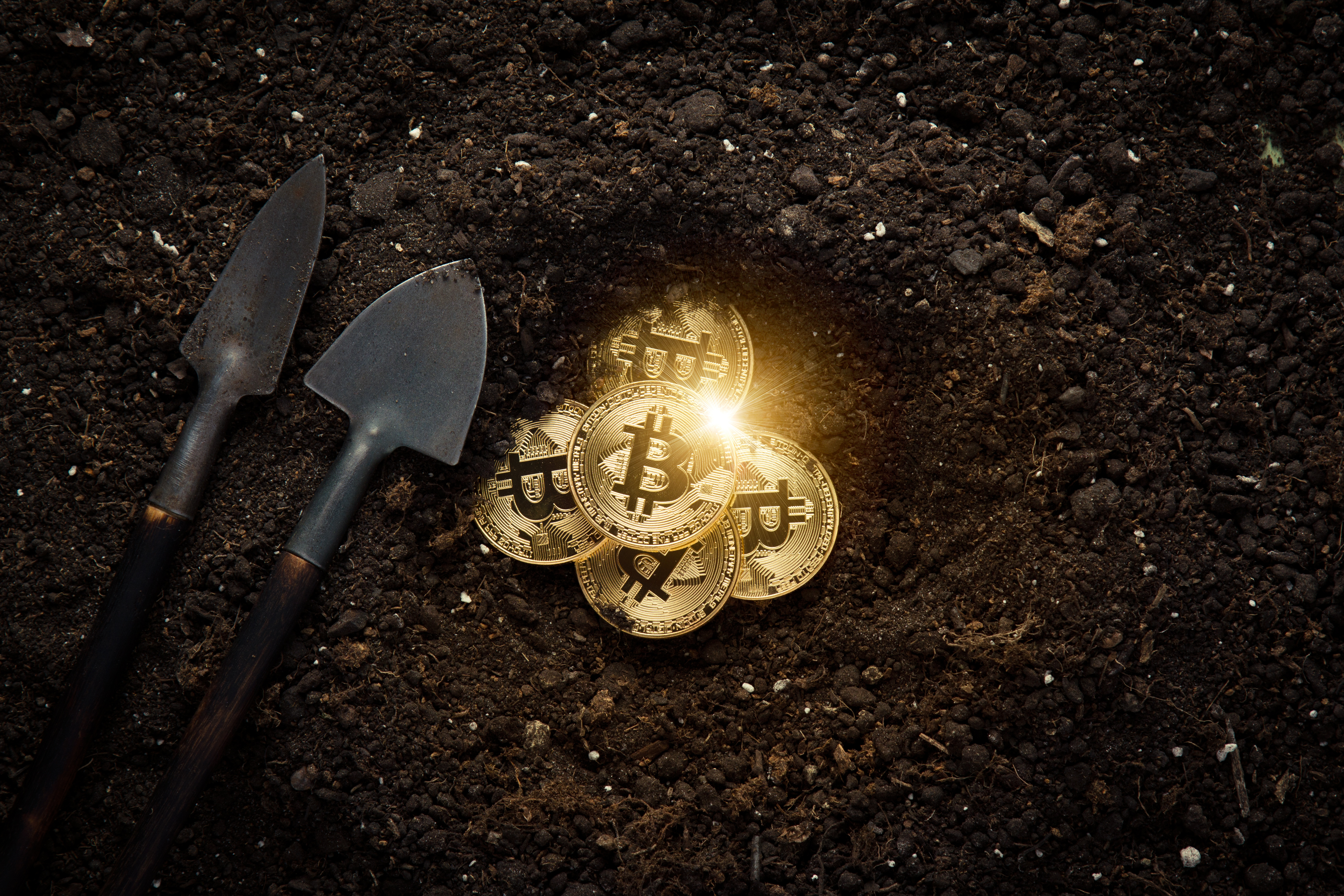 Mining for Bitcoin Computers ‘mine’ for Bitcoin by solving irreversible cryptographic puzzles. The first to solve each puzzle is rewarded with new Bitcoin and new puzzles are progressively more difficult to solve. Source: Shutterstock

In the wake of the global financial crash, trust in financial institutions and conventional currencies was at a low ebb in 2008. The prospect of a new transparent currency that could not be corrupted or hacked had its merits. Launched in 2009, Bitcoin took time to take hold and, while its value soared late last year, it has dropped sharply since and remains highly volatile.

Bloomberg estimates that a thousand investors hold 40% of Bitcoins in circulation. These so-called ‘whales’ could easily bomb or manipulate the market. US regulators have said – somewhat cryptically – that some digital coins could count as currencies and thus be covered by normal trading rules.

The early adopters and other enthusiasts see Bitcoin as ‘digital gold’ that will change the world. There are now said to be over 1,500 cryptocurrencies in circulation. Many start-ups are issuing their own.

A long and growing list of eminent companies – from Microsoft to Bloomberg, and Virgin Galactic to Tesla ­­– accept payment in this form.

On the other side, critics, including eminent financial experts, denounce Bitcoin and the like as a digital bubble.

There’s also the dark side. By enabling anonymous and untraceable transactions free from government oversight, Bitcoin has reportedly become the money-laundering currency of choice for international drug dealers and organised crime.

For reasons of credit risk, Lloyds Bank has prohibited its customers from using their credit cards to invest in cryptocurrencies. In February this year, the Chinese government banned all websites trading in cryptocurrencies for fear of destabilising the economy due to fraud and pyramid selling. In March, the UK Government launched a task force to investigate their risks and benefits.

What is incontrovertible is the genius of the blockchain tech that makes cryptocurrencies and so much more possible.

The technology was invented for Bitcoin, but cryptocurrencies are just the first application. Some liken it to email on the internet. Except blockchain itself could provide the foundation for a new internet.

Ethereum, the open-source blockchain project, provides a platform for developers to build all kinds of decentralised applications. They promise significant benefits, not least increased security, reduced costs and faster transactions.

‘Smart contracts’ will drive much of the transformation, especially in transactions. These execute automatically when specified conditions are met – so that, for example, a derivative pays out when a financial instrument hits a pre-set benchmark.

Similarly, the middleman could be cut out of share trading and a host of financial transactions. Ethereum believes decentralised apps (Dapps) “have the potential to profoundly disrupt hundreds of industries” – notably finance, real estate and insurance.

Several countries want to use blockchain to make public record-keeping such as land title registration, more efficient. Medical records are another area of interest, especially among insurance providers and pharmaceutical companies in the US.

In the automotive sector, Toyota is among those exploring how blockchain could facilitate data sharing to improve the safety and reliability of driverless cars. Meanwhile, the conjunction of blockchain tech, the ‘internet of things’ and artificial intelligence could open up exciting opportunities for manufacturers and telecoms companies.

As well as the finance sector, file storage and data management are other business services in line for disruption.

Indeed any business – including our own – could use distributed ledgers to streamline relationships with clients and third parties. The construction sector, where multiple stakeholders are involved in projects, is another notable case.

These developments are happening now or in beta. As blockchain harnesses the ‘wisdom of crowds’ it will spawn others. Many companies, extending beyond the tech sector, are already or soon will be involved in their own applications and innovations.

No-one yet knows which, but there’s a growing consensus that blockchain will be transformational, and some Dapps will succeed. Even if their developers recoup their R&D credits and reap their rewards in cash rather than Bitcoin.

Jonathan Cardle is a Business Development Manager working within our innovation tax team. Jonathan has an MA in Business Management & Marketing and an MSc in Business Finance from Heriot Watt University.