Amid rising concerns about poor air quality, pollution and its health effects on Londoners – including premature deaths – the electric car must be the saviour of our choking cities.

The year is 1884, and inventor Thomas Parker, who was responsible for electrifying the London Underground, produces the first factory-made electric car in the capital.

Thomas Parker’s Electric Car | C.1885. Parker, sat in the middle, in one of his electric cars outside his home near Wolverhampton.

By 1910 there were more than 33,000 electric cars registered in the USA alone. But the electric car revolution was short-lived. That was the peak. The reasons for its 1920s decline were manifold.

Road infrastructure was improving, opening up highways for vehicles with a greater range. With their lead-acid batteries, electric cars were limited to cities by low 15-20mph speeds and a short 30-40-mile range.

The discoveries of abundant reserves of petroleum around the world made petrol affordable, and cars powered by the internal combustion engine became easier and cheaper to operate.

Technological improvements played their part – like the electric starter, invented in 1912, and mufflers. Drivers no longer needed to hand-crank engines and motor noise became bearable.

Then Henry Ford began mass production of petrol gas-powered cars, driving down prices, as the cost of electric cars rose.

Cultural factors were at play too. People loved the speed and sound of petrol cars. The love affair with the motor car had begun.

With the passing years the consequences, especially in cities, have become impossible even for petrol-heads to ignore. More than a century on from Mr Parker’s prototype, the second coming of the electric vehicle is overdue and highly significant.

In 2004 Tesla began developing of the Roadster. “We will not stop until every car on the road is electric,” declared founder Elon Musk. Never given to understatement, he may be proven right; hydrogen-powered vehicles, the other great hope for zero-emission transport, also use electric motors.

The batteries of electric vehicles are still more expensive than combustion engines, but costs halved in the three years 2014-2016. With ongoing scale and process improvements, electric cars may even gain a competitive edge.

Their range has also improved – from a 2011 median of 73 miles to 114 miles in 2017. Although more than enough for a few days’ average commute, range is still cited as drivers’ biggest concern.

Infrastructure – this time the lack of a universal network of charging points – may prove more of a barrier to faster and more widespread adoption.

Imagine if you could charge your car like a smartphone or electric toothbrush. That technology has already arrived. Not only is wireless charging feasible for a parked car, it is even possible while driving at speeds up to 100kmh.

Inductive charging transfers electricity through the air from a magnetic coil in the charger – embedded in the road surface – to a second coil fitted to the underside of the car. It is the same as when you lift your phone very slightly off its charger, the power still passes, but over a distance measured in inches, not millimetres.

Commercially available wireless car chargers, like those sold by US firm Plugless, pass electricity across an air gap of four inches to a wireless adaptor fitted to the underside of the vehicle.

Qualcomm says its Halo system can transfer power at up to 22kW, the same as ‘rapid’ public chargers capable of adding 80 miles of range per hour. Halo has been tested in the harsh racing environment of Formula E over the past three years. Qualcomm claims 90% efficiency, meaning 10% of electricity is lost while being zapped across the air gap. 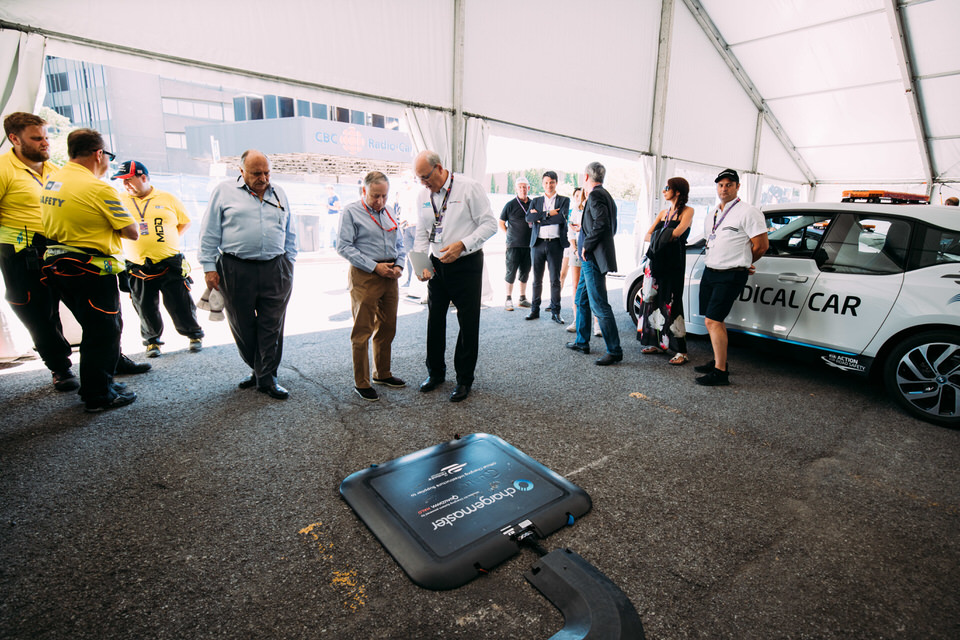 Qualcomm’s Halo System | Halo has been tested in the harsh racing environment of Formula E over the past three years.

The company has already proven its ‘dynamic electric vehicle charging’ (DEVC) technology on a short test track in France with sub-surface chargers. A fleet of Renault Kangoo electric vans were each fitted with two 10kW charging pads. When driven along the road they picked up tiny amounts of energy from each charger. While the batteries don’t refill, crucially they don’t lose any power en route.

Furthermore, this was a regular road surface, and Qualcomm says it was not affected by rainfall. Charging at 20kW was possible at speeds of 62mph (100kmh).

The UK government wants to kick-start wireless charging solutions on roads as part of a £40 million research and development competition run by Innovate UK. Sweden has just opened a 2km stretch of road with an electric rail.

Unfortunately, the infrastructure costs could be prohibitive. Current estimates say it would cost around €4 million ($4.5m) per kilometre of highway.

Dynamic charging may be some way off, but the wireless charging market for stationary vehicles is buzzing.

As well as Plugless – which sells pads for Tesla, Nissan and Chevrolet, BMW offers a pad for its 530e iPerformance hybrid.

Other players are Honda and Toshiba, which uses magnetic resonance technology (with a tolerance for misalignment of up to 20cm).

This charging technology has major implications not just for electric vehicles but other market sectors from house builders to insurance companies, highway contractors to the motor industry.

Infrastructure will be crucial. The Government’s Go Ultra Low campaign estimates that up to 90% of EV charging takes place at home. Car owners without a driveway or garage will be reluctant to make the leap to electric. The UK is reported to have around 16,000 charging points for 150,000 registered EVs, and just one rapid charger for every 43 cars.

A national strategy to plug that gap was launched in July 2018. The Government wants half of all new vehicles to be ultra-low emitters by 2030, with the sale of petrol and diesel cars and vans to end by 2040.

Its Road to Zero Strategy calls for charge points in newly built homes. A £400m Charging Infrastructure Investment Fund will encourage new and existing players to accelerate the roll-out of public charging points. The previously mentioned £40m programme for low-cost wireless charging on-street could also see charging points in lamp posts; (some in Hounslow have been retrofitted in a pilot scheme). Homeowners may get up to £500 to install charge points, with increased grants for workplaces, and continued support – at least in the short term – for buyers of electric cars and vans. A joint taskforce from the energy and auto industries is the other initiative.

This Electric Vehicle Energy Taskforce has its work cut out.

So far there has been little or no consistency of technical specs, connectors or payment systems. Putting chargers in lamp-posts may sidestep street clutter, but they trickle power at 2kW/hour (compared with 7kw/hour from dedicated street charging points), can’t be booked, and create a trip hazard.

A shortfall of more than 80% in charging points has been predicted from the 83,000+ needed to meet expected growth in the EV market to 2020.

Transport accounts for some 28% of the UK’s greenhouse gas emissions. If we are to de-carbonise our driving, a dense, user-friendly and standardised fast-charging network will be essential.

Wireless charging pads in parking spaces, on and off-street, are a smart solution, easier than refuelling a petrol/diesel car. And on-the-go dynamic charging would give the electric vehicle revolution unstoppable momentum, finally parking vehicles burning fossil fuel in transport history.

Ash Sudding is a Manager for Key Accounts at Ayming UK, working across R&D Tax, Operations Performance and VAT. He has a degree in Economics and Econometrics from the University of Johannesburg in South Africa, and previously worked in the specialist banking and asset management sector.